I could use some good jokes. Havent laughed in a minute. 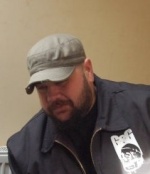 Ok these are bad but they make me laugh.

Why does Snoop carry an umbrella?

What's brown and rhymes with Snoop?

short but funny. Had to think about the 2nd one. LOL

How do you find Will Smith in the snow...

What do you call a parrot with an umbrella?

What sort of cheese do you use to hide a horse?

An Irish man walks in to a Irish pub and sits down, orders a jameson. The guy next to him introduces himself and asks where's he from? The gentleman says I'm from Dublin. So am i say's the man. Then he goes to ask what school did you go to? The gentleman says I went to Saint Marry's, so did i says the man. Lets have some shots. A hour goes by and the two men are loud and falling off their bar stools. A guy at the the end of the bar asks the bartender whats the special occasion? The bartender says, oh, it's just the O'Malley brothers.

Bill walks into a post office one day to see a middle-aged man standing at the counter enthusiastically writing addresses on bright pink envelopes covered with hearts.

He then takes out a scent bottle and starts spraying perfume over them. Bill’s curiosity gets the better of him and he walks over to the man and asks him what he’s doing.
“I’m sending out 1,000 Valentine’s Day cards signed, ‘Guess who?’” says the man.

“Why on earth are you doing that?” asks Bill.

“Because I’m a divorce lawyer.”

What's red & looks like a bucket?
A red bucket.

And here's a riddle for you...

Very clever! I'll accept that answer, however it's not the one I was looking for... Any other guesses?

Bob, a handsome dude, walked into a sports bar around 9:58 pm. He sat down next to a blonde at the bar and stared up at the TV. The 10 pm news was coming on. The news crew was covering the story of a man on the ledge of a large building preparing to jump.

Just as the blonde placed her money on the bar, the guy on the ledge did a swan dive off the building, falling to his death. The blonde was very upset, but willingly handed her $20 to Bob, saying, "Fair's fair. Here's your money."

Bob replied, "I can't take your money. I saw this earlier on the 5 pm news, and so I knew he would jump."
The blonde replied, "I did too, but didn't think he'd do it again."
Bob took the money...

Well, you lot started it!

The wife has just been admitted to hospital with a broken jaw and 2 black eyes. Turns out we were on different wavelengths when she said she wanted decking on the patio!

This one might be of use to anyone with too many Xs on the label of their Tshirt:

A guy calls a company and orders their 5-day, 10 lb. weight loss program. The next day, there's a knock on the door and there stands before him a voluptuous, athletic, 19 year old babe with a sign around her neck.

She introduces herself as a representative of the weight loss company. The sign reads, 'If you can catch me, I'm yours.'

Without a second thought, he takes off after her. A few miles later huffing and puffing, he finally gives up. The same girl shows up for the next four days and the same thing happens. On the fifth day, he weighs himself and is delighted to find he has lost 10 lbs. as promised.

He calls the company and orders their 5-day/20 pound program. The next day there's a knock at the door and there stands the most stunning, beautiful, sexy woman he has ever seen in his life. She is wearing a skimpy running outfit, running shoes and a sign around her neck that reads, 'If you catch me, I'm yours.'

Well, he's out the door after her like a shot. This girl is in excellent shape and he does his best, but no such luck. So for the next four days, the same routine happens with him gradually getting in better and better shape.

Much to his delight on the fifth day when he weighs himself, he discovers that he has lost another 20 lbs. as promised. He decides to go for broke and calls the company to order the 7-day/50 pound program

'Are you sure?' asks the representative on the phone. 'This is our most rigorous program.'

'Absolutely,' he replies, 'I haven't felt this good in years.'

The next day there's a knock at the door; and when he opens it he finds a huge muscular guy standing there wearing nothing but pink running shoes and a sign around his neck that reads, 'If I catch you, you're mine.'

He lost 63 pounds that week.

Lol, I'd have been happy just yo-yo dieting with the first one

A chair, a toothbrush and a comb?

A drunk walked into a tavern, sat down at the bar. He placed a small cardboard box on the bar, and ordered a beer. When the beer came, he opened the box, pulled out a tiny piano and bench and set them on the bar, then ordered another beer.

When that beer came, he reached into the box, pulled out a frog, sat him on the piano bench and said, "PLAY". The frog immediately began to play the piano. It played all the favorites, and some classical and then launched into contemporary jazz.

The man ordered another beer, and when it came he reached into the cardboard box and pulled out a little white mouse. He set this mouse on top of the piano and said "SING". The frog began to play the piano and the mouse began to sing, first some 'oldies but goodies', then all of the current favorites.

A man at the bar who was watching all of this approached the drunk man and offered to buy this little outfit that he had. After a bit of negotiating, the drunk man agreed to sell it to the man for $500.

The man gathered everything into the little cardboard box and ran out the door before the drunk could change his mind.

The bartender had been watching all of this goings on and said to the drunk "You damned old fool! You just sold that little outfit you had for $500 and you could have made millions off of it!"

The drunk laughed heartily and replied "I am not the fool, the guy who bought it is. Do you really think I would have sold that if that mouse could really sing?"

The bartender responded "What do you mean, I stood right here and listened to that mouse sing!"

"The joke is on you and the guy who bought that outfit my friend", chuckled the drunk. "That mouse can't sing. The frog is a ventriloquist!"

What do you call an anorexic with a yeast infection?

A quarter-pounder with cheese.

The benefits of simple origami are two fold

A chair, a toothbrush and a comb?

B*llocks, I've been thinking about that for a couple of days. It was that easy?!?!?

Yep. Well, I didn't say it was a single item.

I was in the pub yesterday when I suddenly realised I desperately needed to fart.
The music was really, really loud, so I timed my farts with the beat.
After a couple of songs, I started to feel better.
I finished my pint and noticed that everybody was staring at me.
Then I suddenly remembered that I was listening to my iPod.


turntablist wrote:B*llocks, I've been thinking about that for a couple of days. It was that easy?!?!?