"How it used to be" lyrics?

"How it used to be" lyrics?

hi there!
is it possible to get the "how it used to be" lyrics posted?
just reminds me that the UD website lyrics section hasn't been updated since the latest album! any chance to do it?

have a great time,
marcus

Thanks for your message. I do have the lyrics for the new album all set to upload so I apologize for slacking on that. I still have a little formatting to do (for some reason Andy refuses to use capital letters) but for the most part they're ready. So I'll try and get that done as soon as I can. In the meantime, here are the lyrics for How It Used To Be. Thanks again, keep it fresh everybody!

i remember the first time that i grabbed a mic
i had the butterflies and a little stage fright
that night tupac got shot
u.d. hit the stage and the set was hot
the west coast gettin' back on the map
J5, dilated, and the rest of the pack
we started pressing demos in the form of cassettes
and then we got calls from the record execs
it was so excited just being in a group
getting interviewed and doing photo shoots
the sky was the limit that's why i reminisce
and think about the past 'cause today it's all stress
i heard life gets better with age
but the older i am, the smaller the cage
trapped and i want to get loose and free
and go back to the way that it used to be

now, we say we want life how it used to be
but that depends on the past that we choose to see
'cause once upon a time when i didn't see obstacles
every goal felt possible
then one day, white and black overlap into grey
and they say that's childhood passing away
so there go the dreams and the big aspirations
it's like i missed the train and i'm sitting at the station
thinking, "isn't life bigger than this?"
as i scribble all the things i ever did on a list
and conclude old times were better but now i see
the truth is that i was better it was me
a skinny kid with lots of bounce in his steps
who was always looking forward not an ounce of regret
so he often contemplated large amounts of success
but now he's getting old and only counts up the debts
feeling lost and tossed in the wind
dead-locked in a box that's toxic within
and i'm blocked but i pick the same option again
'til i'm caught on a limb and i'm not gonna win
wait a minute, this is crazy
i need to do a 180
and go back not to a place or time
but a state of mind i can age like wine
and get better 'cause i'm truly alive
when i walk in god's grace not seeth and stew in my pride
just movin' all loose and free
the way that it used to be 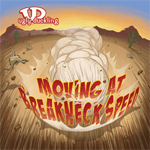 great, thank you so much!